BPTA Council decided that it would support 2 charities at its 2013 Dinner & Dance held at the Woodlands Hotel, Broughty Ferry on Friday, 22nd November 2013. The 2 charities chosen were Farm Africa (which helps African farmers grow themselves out of poverty) and Scotty’s Little Soldiers (which helps the children of men and women killed while serving in the British Armed Forces). Due to the generosity of patrons attending the Dinner & Dance and those businesses that donated prizes the marvelous sum of £1,000 was raised and this was equally divided between the 2 charities. Letters of thanks from the 2 supported charities can be viewed below. 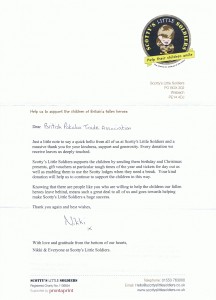