The Haigh Trophy has been awarded to Bob Doig. The presentation was made by Russ Kelsey, BPTA President to Rob Doig (Bob’s son) at a dinner in Dundee on 14th November 2014. Bob was unable to attend in person due to his wife being taken ill. 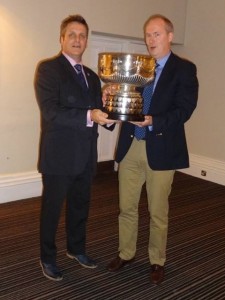 Robert (Bob) Doig has been involved and pro-active in the potato industry spanning 6 decades. He is renowned for promoting a sustainable, people based potato industry that is grown by forging lasting relationships with both suppliers and customers at every level. He has impacted on the potato industry at every level from breeding and variety development as a member of the Caithness group of companies, through the championing of Scottish seed potatoes to liaison with multiple retailers. On a political level he was instrumental in advocating the move from the former Potato Marketing Board towards a body much more suited to today’s industry. As such he has had considerable influence on the industry as we know it today. He served on the Council of the Scottish Potato Trade Association and served as its President during 1991-94. He still plays an active role in the business  he founded (Robert Doig Ltd) along with his wife, Zella, who bred a number of the varieties currently being marketed by Caithness, and his son Robert, who manages the business today. 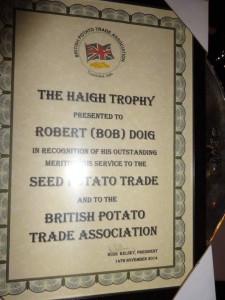